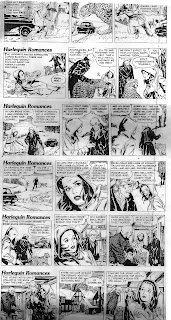 Many years ago I drew a couple of newspaper comic strips for the Los Angeles Times Syndicate. One of them was written by veteran comics author Jim Lawrence (James Bond, Friday Foster, Captain Easy etc.). Jim was the source of these two sample weeks of a proposed Harlequin Romances strip, based on the insufferable and insufferably successful Canadian series of paperback romances. To my knowledge the strip never went anywhere.

Jim wrote. It's not hard to guess the artist's identity: none other than the immortal Leonard Starr. In fact, Mary Perkins leaves the stage briefly to star here as Helen James, runaway heiress. Mary's, er, Helen's car breaks down in the snow, and she is given shelter by the Brooding Handsome Stranger that always seems to inhabit these novels.

Jim loaned me printed proof sheets of the samples. I made Xerox copies of the proofs. It's from these copies that I made the present scans. You'll note the top strip of each page is clipped off. That's because back then legal-size copies were 20 cents and I was a cheapskate.

I'm not sure how Starr figured he was going to handle the workload of both this strip and On Stage. Maybe he would have shopped one of them out to assistants. At any rate, it's a very nice job by a consummate illustrator. 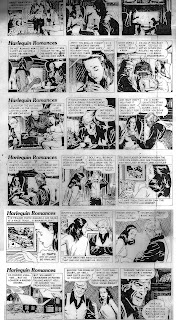 P.S.: I read in a 2005 forum posting that Cosmo Girl magazine was running Harlequin romances in manga form. (A perfect match. Two tirelessly repetitive imported creative traditions.) Does anyone know anything about this? Couldn't find an example online.

Posted by Smurfswacker at 4:51 PM

I'm surprised no syndicate picked up on this. There was a good chance it would have been a runaway success and the art is great. Was this in the mid-sixties?

No, much later. Jim showed me the samples in 1982 or 1983. He didn't say just when they made the pitch, but I got the impression it had been within the previous few years.

I think someone should go through all his fanzines and do an article or book about unsold comic strips. I have seen samples from Jim Aparo, Jack Kirby, Bill Elder, Harvey Kurtzman and many many more. Alfred, something for you maybe?

Ger, that's an excellent idea for someone with lots of contacts and a wide range of knowledge (someone, that is, exactly unlike myself).

I'd be curious to see what kind of strip Jim Aparo pitched. Having a syndicated comic strip remained the Holy Grail of American cartoonists long after the prize was worth having. Everyone remembered the legendary strip millionaires like Capp, Fisher, Raymond, Caniff, etc. They figured that a strip with a major syndicate meant their own shot at wealth.

That came up during my Dallas days. As I mentioned in my blog, I was hired not because I good but because I was cheap. Old-timers who had labored as assistants for years, yearning for the Big Break, assumed I was making the Big Bucks. After all, it was a huge property and a major newspaper. Little did they know!

Consider that one of my replacements on Star Trek (I think it was Ernesto Colon) found the pay so contemptible that he donated it to charity!