The Mystery of the Disney Orgy This post is really a comment about a post on Joakim Gunnarson's blog, Sekvenkonst. My comment was so lengthy that I thought I'd waste my own storage space rather than fill his. Unless you read Joakim's post and its comments, this won't make much sense. So please put down your pencils and read them now. I'll be here when you return. Welcome back. As you see, the question is whether former Disney artist Frank Follmer was the original source of Wallace Wood's infamous "Disneyland Memorial Orgy" which appeared in the underground publication The Realist in 1967. An online dealer has put a large stock of Follmer's dirty drawings up for sale, accompanied by a glowing biography suggesting the artist was a seminal contributor to Snow White and deserved a place in the pantheon shared by Disney's "Nine Old Men." Who Was Frank? Some Googling turned up a handful of credits for Follmer, mostly as an effects animator in cartoons and shorts. So Follmer existed and did indeed work for Disney in the 1940s. So far, so good. Several collectors on the "Comic Art Fans" display vintage Follmer pencil drawings like this "storyboard drawing from Snow White:" 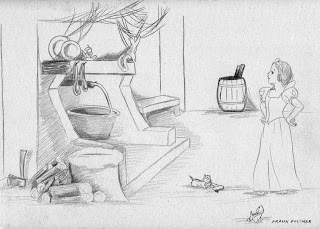 I have no reason to doubt their authenticity, but three things puzzle me. First, these drawings aren't in the Disney archives. The company is famous for holding on to their production drawings. Second, each collector's comments about Follmer are nearly identical. This suggests that the drawings were all bought from the same source (the hagiograpy-writing art dealer?), which prevents cross-checking. Finally, as Joakim points out, the artist doesn't draw very well. Now, not everyone needed to be a top-notch draughtsman to work at Disney. But check out the Disney historical books. The company's board artists were very good indeed. After all, the studio was at the top of its game. It attracted the best talent. So I'm struck by the poor perspective and lifeless drawing in the storyboard panel. Consider also this sheet, offered by a different online vendor: 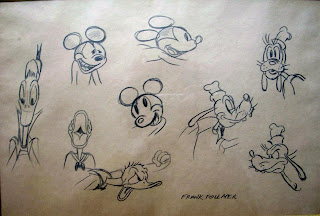 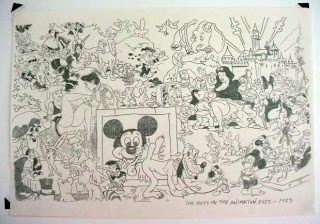 The legend reads: "The boys in the animation department--1955." Obviously Follmer liked the theme of this piece, because he created endless variations. I presume this is not his earliest version. In a 2009 post on the Realist site a contributor calling himself "John Collector" wrote: "Few people know that Frank Follmer was the original artist[of the orgy]. Wally Wood recreated the original for the Realist #74 [in 1967] one month after Walt Disney passed away. Paul Krassner owns the copyrights and often claims he inspired the work, but I have several original versions of this piece purchased directly from Follmer in the 1950s on Disney studio paper dated 1940." There's no reason to doubt the gist of the story, but the dates are tricky. John Collector says the original versions dated from 1940 and he purchased them "in the 1950s." If we accept Follmer's date on the black-and-white piece, 1955, then John Collector bought the drawings between 1955-1959. This and several other drawings feature Sleeping Beauty's Castle, landmark feature of Disneyland theme park, which opened in 1955. Presumably all Follmer drawings with that castle were made after 1955. Moving back in time, Alice in Wonderland and Peter Pan were made in 1951 and 1953 respectively. No versions including those characters could pre-date 1951. By the same token, Bambi appeared in 1942 and Dumbo in 1941; any versions with those characters were created post-1942. Sorting everything out, it appears that Follmer produced the Disney orgies now on sale in the late 1950s. This doesn't preclude the possibility that he did do a version in 1940. It just means that such a version isn't among the current lot. Ours Is But to Wonder Why Why did Follmer do so many of these things? If the original had been simply a prank to amuse his fellow artists, Follmer probably would have drawn a copy or two for friends, but that's all. Maybe he planned to sell them. If so, he didn't do very well considering how many he had left to sell to John Collector. Was he simply obsessed with Disney characters fucking? After all, some fan artists are. If so, why didn't Follmer invent new poses for the participants instead of using the same ones over and over, flopping one occasionally? We may never know. Finally, why would Follmer misrepresent the dates of his work? Many minor old-timers have told fans stories to make themselves seem more important than they were. Follmer might have been one. Or he may not have misrepresented the dates at all. He could have been vague about dates and John Collector, like many dealers, filled in the details from his imagination. Did Woody Do It? I began this ramble intending to find that Follmer had copied his orgies from Wood's Realist drawing. I've changed my mind. Wood drew his poster in 1967, so all Follmer's work would have to come after that date, and all John Collector's information would have been lies. A gut feeling tells me JC was gullible, but not an outright liar. He wouldn't stand to lose much by admitting that Follmer drew his orgies in 1956. That was still a decade before the Realist drawing. He had no need to fabricate an elaborate backstory dating to the 1940s. On the other hand it's easy to imagine counter-culture publisher Paul Krassner stumbling across a copy of this underground masterpiece and viewing it as an anonymous cultural artifact like the "What Me Worry" kid. He hires Wood to clean it up (in the artistic sense only). Krassner could easily believe he "inspired" the work because he was the one who found it and introduced it to the Age of Aquarius. That's All, FFolkes... How close is my analysis to the truth? I'm just another fanboy...we won't know until old-timers who knew Follmer weigh in to either confirm or refute the dealer's version of the story.
Posted by Smurfswacker at 9:40 PM

Good post!!!
Just noticed one thing that is a give away that Follmer did his work after Wood.
Follmer probably only had a bad photocopy of the Wood piece when he did his paintings. Otherwise he would have noticed that the black beard/moustache on Captain hook isn't a beard/moustache.
It's his lips, which Wood uses zip-a-tone on to make it look like lipstick. And if a copy is reproduced badly/too dark the zip can become... black. Thus making it look like a beard.

I wonder who really did these drawings?
Or if Follmer did them in a late stage of his life.
Buuuut, then John C couldn't have bought them in the 50's.
Boy, are people who have a Follmer in their collections getting worried now. :)

Edit: Took a look at the Wood drawing in the Craig Yoe book "Clean Cartoonists Dirty Drawings" where it's reproduced large. And from that I can tell that the lips of Hook probably have hand drawn pen lines and not Zip-a-tone. However, the effect would be the same if badly reproduced.

It's embarrassing to enter a fray over such an ignoble moment in comics history, but irresistable.

More telltale: overlaps are precisely the same. If Wood was asked to reconstruct something, would he really have had Tinkerbell's wing overlapping precisely the same point on Cinderella's petticoat? Or The big bad Wolf's lower lip underlapping her bouffant?

That thing's a tracing of the Wood piece and somebody's fibbin'.

Looking at that Follmer site, I see he was kept on at Disney only three years, '37 - '40, which isn't the profile of a major Disney talent. I'd guess an assistant animator at best, and the rest is resume inflation.

Lots of (rather amateur) art at that site, I would imagine done after he left the studio.

Well, Joakim and Paul, you've got me. At first I leaned toward Wood as the original artist, but my reason was impossible to prove. It was based on the figure of Tinker Bell undressing. That's a tough pose to begin with, but in the Realist drawing it's so natural and so thoroughly Wood. On the other hand Follmer never got it right. It was hard to imagine that such an indifferent artist would have chosen such a challenging pose in the first place.

Bighearted me gave Follmer the benefit of the doubt because otherwise we'd be left with the picture of a middle-aged artist light-boxing dozens of versions of someone else's dirty picture. It seemed a bit pathetic...

But Paul's critique cinches Wood's authorship. It's so simple that I feel stupid not to have noticed. Even if Wood, no stranger to light-boxes, had traced Follmer's drawings there's no way that he wouldn't have made some adjustments.

I bid my naivete adieu and confess that the Follmer drawings are not what they're made out to be. And that means someone is fibbing. *sigh*

The Wood/Krassner poster did not carry a copyright, so there were several rip-offs, including a black-light version. I have one I found in 1971 in a head shop. It's a crude redrawing with added figures which aimed for extreme raunchiness rather than the milder Wood approach.

Funny you mention this--I had that same poster in my early days. Bought it somewhere in San Francisco. Long gone, though.

Not a phrase I expected to hear in connection with this piece.

Re: your surrender. I feel like I just told a younger brother the truth about Santa Claus. Yes, Mom and Dad were lying all the time!

Your kind instincts undid you.

First, the Follmer 1955 sketch referenced in this blog is a reversed image of Wally Wood's Realist art. If you do a digital horizontal reversal of the Follmer sketch, you have the exact layout for Wood's art. Why would there be such a reversal? Would it be a simple way to avoid a charge of copying in the pre-computer age? But, copying by whom?

Moving on, Wood's art has elements that are not in the Follmer sketch. The Mickey Mouse nephew at the lower left corner is missing, the large butt-tree at the upper left is also missing, the two flying baby angels are missing, the bird on the left of Dumbo is missing and the Disney castle has some differences. Of course, these differences could be things Wood added to the Follmer sketch or they could be things ignored when Follmer copied Wood's art. So, there is no smoking gun, even though it must be admitted that Wood's pictures of Jiminy Cricket, Cinderella and the pirate are definitely superior. But, better art doesn't prove original art.

It has been argued that Cinderella's head overlapping the wolf character and Tinker Bell's wing overlapping Cinderella's dress are odd similarities between the Wood and Follmer drawings that do suggest copying. I agree, but you really can't say who did the copying. I do find it strange that Wood and Follmer produced a surprised pig's face without taking the time to bother to show eye-contact between the salivating wolf and the surprised pig. Wood was well-known for his realism and meticulous detail, so it does seem odd that he would miss this rather obvious misalignment.

The last and most telling thing in my opinion is that Wood never claimed authorship for the Realist art. Wood had always provided a "Wood" logo to mark his work, no matter how offensive or raunchy. But, there is no Wood logo on the Realist art. This suggests to me that Wood copied the artwork and would therefore not claim it as his own, even though he definitely improved it. Wood did the work, got paid and then walked away without stamping it as a product of his own mind. In the latter stages of Wood's life he was embittered and hard up for cash, so my guess is he was not above copying. Also, since he was copying someone else's art, he would likely not have cared about improving something like the positioning of a wolf and a pig to provide eye-contact. So, that subtle bit of sloppiness is consistent with copying.