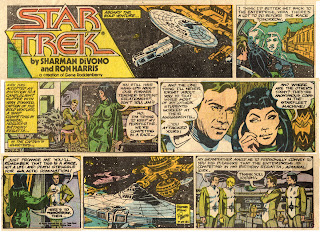 I remember the years when I was drawing Dallas and Star Trek as a blur of lots of work, lots of frustration, lots of drama, and not much money.

I was originally hired to draw Dallas, but when Thomas Warkentin left Star Trek, that was the strip I really wanted to draw. Not only did I like the property better, but also Paramount pretty much left the strip alone. There was none of the nasty, iron-fisted editorial intervention that Lorimar practiced on Dallas. That was partly why I offered to take the strip on. Another piece was that I'd be earning more money. But the major reason was to provide an entry into the syndicate for a "good friend." This laid the groundwork for much of the aforementioned drama. Suffice it to say that one should keep personal and professional relationships separated. Widely separated.

My final Trek storyline concerned the Enterprise entering a regatta and running afoul of space pirates. It was my favorite story of the bunch. It followed a long, incredibly-complicated nightmare on which the writer collaborated with noted s-f author Larry Niven. That episode is a story in itself. I suppose I'll tell my side of it one day. I mostly remember the story as Advanced Lettering 101. There was lots of this: 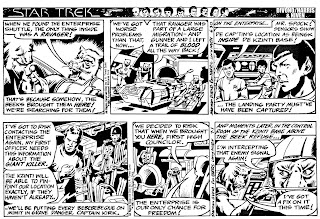 In comparison the regatta story was just the right length, focused, and well-plotted. The dialogue was good and there were nice character bits. It was a joy to work on, though I didn't stay through to the end. Thomas ghosted the last two weeks after I resigned both strips in a state of exhaustion.

I was always playing catch-up on Trek. The syndicate cared more about Dallas, which made a lot more money even after losing half its original list of papers. But one weekend I stayed up extra-late to do this Sunday. It remains my favorite bit of Trek art. It was one of the few originals I kept. The others I sold cheap in a fit of depression to some art dealers pretending to be fans.

The writer and I snickered over the suggestion in panel 3 (Kirk putting on his shoes) that Kirk had slept with Vera DiMarco. It was as close to sex as anyone got at the L.A. Times Syndicate. I luxuriated in doing the Wood inking thing and devoted loving attention to Vera's clingy gown. Here's a scan of the b&w proof sheet: 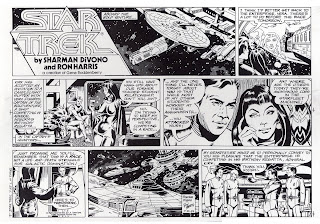 The color version above is from the Houston Chronicle, one of the few papers that carried the strip.
Posted by Smurfswacker at 4:23 PM

Hi, Ron! I hope you remember me. It was a pleasure interviewing you years ago for Star Trek Communicator magazine. I still love those old strips. :)

LOVE IT! I am a fan of the first film so seeing what came after it and not based on the other films is a real treat! Is there a compilation in book format?