Back from the Dead... for a Noble Cause.

It's been years, literally, since I took to working day and night and stopped posting here. I figured I'd never do so again. But a side project has driven me to appeal to the handful of people who might happen to read this post.

And a day later the mystery is solved! Please read the addendum just before the pictures.

I have been helping a Bulgarian collector/historian to identify the comic strips in some Bulgarian comics published circa 1942. These comics reprinted features from a variety of sources. Some came from the USA, mostly King Features. Some came from Italy. Many came from Serbia. (This was a real eye-opener: I had no idea there was a thriving Serbian comics industry in the pre-WWII period. The War brought it to an end and the artists dispersed to Russia and other neighboring countries.) So far only one of these strips seems to have been a native Bulgarian product.

I am going nuts trying to identify one serial, the title of which translates into "Master of the World." It's a science-fantasy adventure set mostly in the jungle, where European colonists fight huge insects and encounter giant natives ruled by a mysterious woman. The Serbian fans say it isn't a Serbian strip. It's definitely not American. The style and the layout are reminiscent of the pre-war Italian comic papers. I know a lot of pre-war Italian strips, but not all of them. I speculated this might be an Italian strip. However I haven't been able to turn up an Italian original. Unfortunately enquiries to several Italian sites haven't yet been answered. In desperation I wrote to some French fans. They wrote back but so far no one has recognized the mystery strip. This could be a home-grown feature, but all the other comics in the magazine are imports.

One thing we do know is that the original appeared prior to July, 1939. This is because my Bulgarian friend found the same strip on a site about pre-War comics in Turkey. There it appeared as "Enemy of the World" beginning on 24 July 1939. Given time for negotiations and translation this may mean the strip first saw the light of day during 1938.

Does anybody out there recognize this strip???  Yes!

As it turns out, someone did. Thanks to  Doc Mars at http://bdvintagerares.blogspot.com I've learned this strip did indeed originate in France. Its original title was L'Ennemi du Monde (Enemy of the World) and it first appeared in the French magazine L'Epatant, second series, beginning in issue 50 dated 11 August 1938. Script was written by Lucien Bornert and the art was by Pierre Duteurtre. who signed himself "Dut." A French publisher reprinted the strip in 2009 under the title L'ennemi du genre humain (Enemy of Mankind). (By the way, the mysterious woman is the bad guy's daughter.) 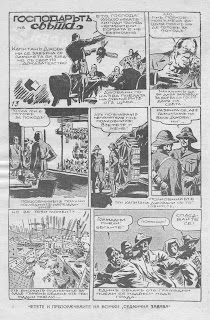 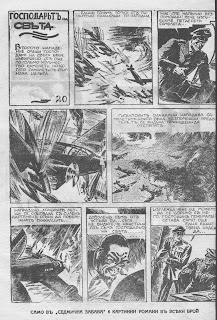 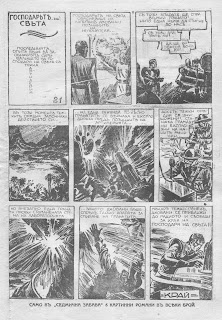 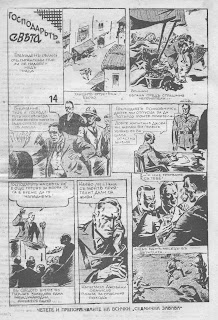 And here is a link to the Turkish version.

Thank you, whoever is still around to read this.
Posted by Smurfswacker at 10:16 PM

wonderful blog--I just found it, via Mr. Door Tree's Golden Age site, and I am very grateful for it. Thanks!

Hi it's Anacho from the BdMag Exhumator !
You asked if we could offer your comics Crash Ryan in French.
The answer is yes ^^ I found!
It will be online early next week.
Would it be too much to ask for an original drawing and a little dedication for the blog?
If it's yes, I'll put it with the article!
Sincerely,
Anacho
[Excuse my english, it's an automatic translation]

Hi! I recently purchased a print drawn by a Ron Howard in 1993. Is it possible you were selling copies of portrait sketches at that time? This particular one is of famous cowboys and I’m obsessed with it. Thank you!