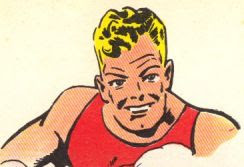 Why the Hell Do You Like That?!
Like every comic strip fan, I have a special regard for some features that, when anyone else sees them, prompts the exclamation, "Why the hell do you like that?" Sometimes, after a long thoughtful pause, I admit (only to myself!) that I haven't the foggiest idea why I like it. For me the prize guilty pleasure, eclipsing even Gim Toro, is Brick Bradford.
I'm going to make some powerful enemies here, among them the estimable M. Hugo Sleestak and half of Italy's Golden Age fans. Brick Bradford is recognized as a seminal strip in American comics history! How can I call it a "guilty pleasure?" Alas, no matter how much I like William Ritt and Clarence Gray's brainchild, I am forced to admit that it was a clunky mess marred by boring scripts and variable, often poor, artwork.

In truth Brick Bradford's appeal is what the strip should have been, not what it really was. Looking at William Ritt's tenure as writer (1933-1948), one finds a bounty of great ideas. Many were original at the time, or at least not yet done to death: a giant robot terrorizing a city, a lost civilization in the Arctic ice, a journey into subatomic worlds. Ritt, a voracious researcher who liked to pack his stories with arcane knowledge, also cooked up some truly offbeat story hooks I still find irresistible. Among these is "The Lord of Doom," in which a Hollywood leading man reveals himself as the descendant of Temujin the Conqueror and invades Canada and the United States from his hidden Arctic fortress; and "Queen of the Night," in which Brick's lunar expedition discovers a colony of earth people who fled the first World War by building a spaceship and relocating on the Moon!

Ritt's trouble was that he took these great ideas and wrote interminable stories that droned on and on. His characters were of cardboard extra-sturdy even for 1930s comic strips. Their dialogue was of finest lead.

Adventure strips of the 1930s could indulge in much longer storylines than today's holdouts. But Ritt's continuities weren't long, they were nearly eternal. All the stories from 1933 to 1940 lasted more than six months. Then Ritt really went to town. 1940's "The Throne of Titania" ran 765 days...well over two years! The next two stories, "Beyond the Crystal Door" and "Queen of the Night" ran over a year apiece (462 and 468 days respectively). Two short (168 day) stories followed as Ritt lost interest in the strip. After that he departed. 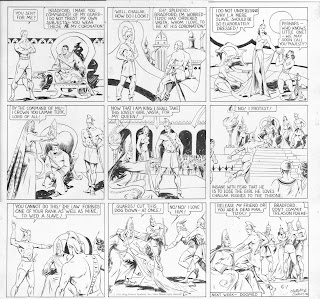 Clarence Gray wrote short continuities for several years until health problems forced him to relinquish the dailies to Paul Norris. Gray continued to write and draw the Sunday Brick until his death in 1957.

I guarantee you Ritt's stories didn't need all that room. Even "shorter" stories like "Adrift in an Atom" were laden with digressions and dead ends. Worse, Ritt often pointlessly spread minor scenes over several days. The following example comes from "The Metal Monster:" 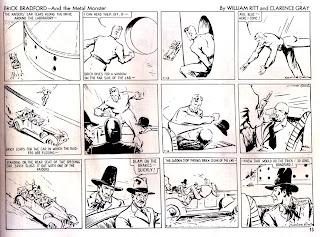 I can't find my reprint to scan, but there's another sequence earlier in "The Metal Monster" in which the bad guy shoots at Brick through his laboratory window. The shooter retreats along a balcony, Brick follows him, then the villain doubles back and winds up behind Brick. This goes on for almost a week. Maybe hot artwork would have made the tedium worthwhile, but that brings us to Brick Bradford's other problem: artist Clarence Gray.

Above: From the strip's first year (1933).
At his best Gray was a competent cartoonist. His work in the first year of the strip was solid if unexciting. From the beginning his figures were stiff, a tendency that worsened as the strip progressed. But Gray had a knack for 30s-style s-f machinery and a flair for exotic landscapes and architecture. However during most of Brick Bradford's heyday Gray wasn't at his best . Some dailies showed real effort:

But far too many were hasty and poorly-composed. Dailies like this looked as if they were knocked out before breakfast.

In fact, that may have been the case! In a King Features publicity piece Gray bragged of once having drawn "six strips in five hours." Bradford dailies from the thirties suggest he did it more than once.

Gray put much more effort into the Sunday pages. Though his compositions were frequently awkward and his figures never lost their stiffness, Gray filled his Sunday panels with action, crowds, and detailed vistas.

The "Middle of the Earth" Sunday is from 1935, not long after the "Brocco the Buccaneer" daily. 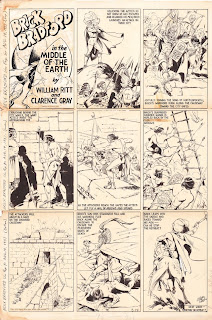 After Ritt left and Paul Norris took over the dailies, Gray concentrated his efforts on his beloved Sunday page. His stiff figures developed thick, rather ugly outlines, but everything else demonstrated the extra care. Take a look at the last two panels of the 1950s Sunday below. Gray's stories were as quirky as Ritt's. I remember one set in an alternate future where Native Americans were America's dominant culture. New York's skyscrapers were shaped like wigwams! 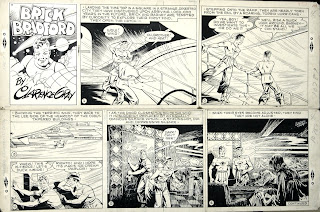 But Gray didn't have the space to develop his ideas, and all too soon cancer ended his career at age 56. Paul Norris took over the Sundays as well...and for me that was the end of Brick Bradford. The character Norris wrote and drew for the next thirty years wasn't the same naive wide-eyed adventurer. Brick, like Flash Gordon, joined the Space Age, though at least he kept the Time Top around.

Naive, wide-eyed adventure. That's why Brick Bradford appeals to me, despite the meandering stories and bad art. It's the romance of lost worlds, nut-and-bolt spaceships, hulking humanoid robots, and hidden civilizations that inspired comics creators and fiction writers alike during the 1920s and 1930s. Ritt and Gray just didn't have the "stuff" to make Brick a truly great strip. But their naive, wide-eyed enthusiasm was transmitted through their efforts into the hearts of readers like me.

To read a Brick adventure, you must check out brickbradford.blogspot.com, hosted by my newly-minted enemy Hugo Sleestak. It is from him I lifted the first two dailies. Most of the remaining artwork in this article came from the fantastic galleries at comicartfans.com, particularly the collections of Francisco Lopez, Maurizio Scudiero, and Massimo E. I'll bet there are more Clarence Gray originals in Italy than anywhere else...they love their "Guido (Giorgio) Ventura"!
Posted by Smurfswacker at 8:01 PM

I love the classics but also have a warm-spot for the crude, poorly drawn and just plain awful. One comic book I recall from my very early days was an old rotting issue of Dick Cole in which every characters face was drawn with dot-dots for eyes and noses, not unlike a poor man's Captain Marvel style, terrible -- and fascinating.

Besides a couple of older Portuguese comics issues, Brck Bradford was known in Portugal mainly because of Paul Norris' stories. I don't mind saying that they appealed to me when I was younger. I enjoyed the plots and the stories weren't too long. Portuguese comics' editors has however a bad attitude regarding the original strips: they used to cut out quite a number of panels in order to shorten what they considered long stories, hence in a few occasions being able to publish two different issues with the same original strips as if they were two stories. But even so we enjoyed it, since we didn't know what was going on. And sometimes a few bolder panels, regarding weapons or women nudity, were retouched because of censorship laws before the democratic Revolution of Abril 1974. And the same thing happened with movies.
But I still like Brick Bradford and I miss the naïvity of those gone days.

Thanx a lot for the post. Brick Bradford is really hard to find nowadays. I've been looking for the adventure in the alternative N.Y. for years!!. Wouldn't you happen to have some pictures from that one??

Klaus, I think that I have some Italian reprints of the New York Sunday story. However it may be a while before I can excavate it from the Demon Garage.

Well, if I can put my hand on them at some point I'll be eternally grateful, believe me!

Klaus: You can see the early Brick Bradford stories in this link:

@Anonymous: Thanks. Great blog! I've been flipping through the blog, but couldn't find the one we were talking about. Is it there? (Maybe I missed it) Do you know the name of the adventure we're referring to?