The Brick of Human Kindness
In an earlier post I ruminated upon my ambivalent relationship with Brick Bradford, the "other" 1930s s-f adventure strip. In brief, it was a strip full of interesting ideas overwhelmed by meandering scripts and indifferent artwork.

While looking for bathtub reading recently I stumbled upon a small press reprint of "The Lord of Doom," a Bradford continuity from 1936. I realized I'd only read the story once before, and that was Club Anni Trenta's Italian translation. So I gave it another look.

Like many of William Ritt's yarns, "The Lord of Doom" is a huge story, running for nearly a year (13 Apr 1936 to 6 Feb 1937). The tale opens with Brick, June, and Dr. Salisbury crash-landing in the arctic wastes of northeastern Canada. They discover a hidden nation populated by descendants of Ghengis Khan's Mongol warriors. The place is technologically advanced and bristles with modern weaponry.

When they're brought before Temuchin, ruler of the hidden land, our friends are surprised to recognize Gola Mongola, a noted Hollywood actor. Mongola, it seems, was sent into the outside world as a youth to study foreign ways and plan for an ivasion. The Mongols are fed up with their hard life in the arctic wilderness. They want to seize territory in Canada and the United States so they can relocate to a friendlier climate. With the aid of brilliant scientist Kalla Kopak, Temuchin has amassed vast army and air forces. The Mongol invasion is about to begin.

The rest of the story describes the war between the raiders and the North American nations. The narrative alternates between a long view of warfronts and troop movements and a close-up view of Brick's adventures. Professor Salisbury helps the allies deploy an "electric wall" across central Canada. The wall is a series of stations transmitting a ray that causes moving metal parts to congeal into a single mass. There is a chilling scene in which Temuchin's planes first encounter the invisible wall. The entire fleet falls from the sky as engines and control surfaces freeze solid. Their modern weapons rendered useless, the warring armies revert to cavalry  and foot soldiers. The Mongols attempt to break through a section of the front not yet protected by the wall. Canadian, American and Mexican troops beat them back.

Ritt describes the war in elaborate detail. As the opposing forces mass for their first combat the story switches to "real time." Each daily strip presents the events of a day in Bradford's universe. The device becomes unwieldy when Brick's personal adventures move to center stage and Ritt wisely abandons it.

Our hero survives numerous clashes on both sides of the front. Several times he enlists the help of a plucky Canadian boy, a short wave radio enthusiast whose home always seems to be nearby when Brick's plane crashes.

This reliance on coincidence spoils a potentially exciting story. The North Americans' final victory arises from two credulity-straining events. To begin with the allies notice that Brick resembles one of Temuchin's lieutenants who died in battle. They disguise Brick as the officer and send him across the enemy lines to penetrate Temuchin's inner circle. Whereupon the warlord notices his lieutenant's resemblance to Brick...and sends him back to spy on the allies "disguised" as Brick Bradford! By the time Temuchin figures things out Brick has communicated all the invaders' plans to the good guys.

Equally unimpressive is the incident that finally ends the war. Ignoring his officers' advice Temuchin flies a solo sortie over allied lines. He is promptly shot down and taken prisoner. In captivity Temuchin realizes his cause is hopeless. He gives up and sends orders to Kalla Kopak to surrender.

It's a disappointing way to end the story, but Ritt saves it with a last-minute surprise. Following the surrender Bradford sympathizes with the Mongols' desire to escape the frozen tundra. He proposes that Temuchin's people be allowed to emigrate to the United States. Brick personally lobbies the League of Nations to permit the former enemy to resettle in the central states and to take a shot at becoming productive citizens of the World's Greatest Country.

It must be remembered that when "The Lord of Doom" was written America was living through one of its many periods of belligerent xenophobia. Popular literature teemed with sinister Orientals leading yellow hordes. For Brick to offer a vanquished enemy--a vanquished Asian enemy--such generosity is astounding.

Brick's faith proves well-founded. The new immigrants thrive. They even carve a commemorative bust of Brick into a mountain overlooking one of their new cities. Kalla Kopak becomes Brick's friend. In subsequent stories he is Brick's Dr. Zarkov, sharing the hero's exploits. Kopak's origin is quickly forgotten as is with the war itself. Forgotten it may be, but in my book Brick's handling of the invasion's aftermath wins him permanent standing as a first-class hero. 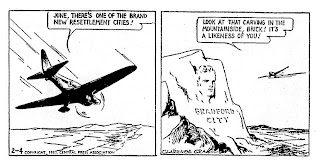 Postscript: Sorry I was able only to reproduce part of most of these dailies. My regular scanner was unavailable and this damned "all-in-one" monstrosity wouldn't fit an entire page without wrecking the book. All reproductions are from a two-volume "Limited Edition  for Collectors" with no publisher information.
Posted by Smurfswacker at 6:18 PM

I am looking for the original strips's publication data of one Brick Bradford's adventure published in Spanish as "La fuga del tiempo" (Chile 1968) where he fights some small bald big-headed aliens.

But it seems to have ben published in French in 1946, so it must be one of the earliest Brackford's Time Top adventures.

You can see them on the right.

Can you help me?

I am looking for the original strips's publication data of one Brick Bradford's adventure published in Spanish as "La fuga del tiempo" (Chile 1968) where he fights some small bald big-headed aliens.

But it seems to have ben published in French in 1946, so it must be one of the earliest Brackford's Time Top adventures.

You can see them on the right.

Can you help me?